Look at this cat. 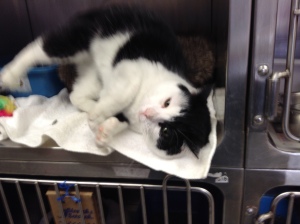 That’s Noodles, who I called The Noodliest of Noodles. He has since been adopted and is now at home. I even think he went with a mutual friend of ours. 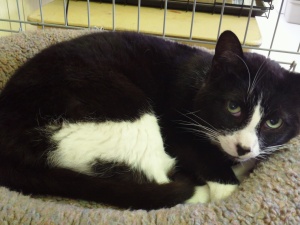 That’s Arthur, who I called King Arthur. He looks a little scared, because he was. He didn’t like being picked up and it was literally my job to pick him up all the time.

I’m glad they went home. I’m sure they’re having a blast. I hope Arthur is still learning how nice and trustworthy people can be. I hope Noodles doesn’t meet anymore mop buckets, like the one I found knocked over on the other side of the room when I came back from washing dishes. Noodles was cowering in the back of his cage, slightly damp, but with only minor injuries to his pride.

The funniest thing about it was imagining what the other cats were thinking as they watched Noodles fly across the room stuck in a mop bucket. It still makes me laugh, even though I was washing stupid dishes and didn’t get to see it.

Have good lives, you two.