Happy Disney Day, cats and kittens! Today we have a wonderful guest post brought to you by B, and we can’t recommend her enough to our fellow wordpressers.

As you surely know by now, we are fans of Disney Princesses. We believe that they have much more to offer than people think they do and in fact, the immediate dismissal of every female character ever is kind of the problem, in our not-so-humble opinions. So we love when people like B talk about the impact of the Princesses in a positive light. Enjoy! 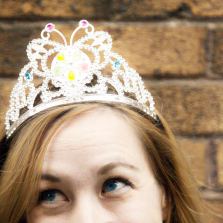 “You remind me of someone,” my new co-worker insisted. It was day two at my new retail job and I was pretty sure it was the first time we had ever met. Other than the case of mistaken identity, things were going well. Sure, I wasn’t exactly the most helpful of employees, but I figured for the time being I could make up for it with my friendly demeanor and positive attitude.

Later, when I was waving good-bye to a customer, my co-worker had a flash of inspiration. “It’s Rapunzel! You know, like from the movie.” Pointing out the fact that she’s a fictional character didn’t stop her from drawing the comparison. “You’ve got long blonde hair, you’re cheerful…I bet you even sing all day!”

As someone who has studied the Disney princess way for most of her life I was secretly flattered. (I used to climb up on the arms of my sofa and practice being Ariel on the rocks.) The Disney princess archetype is often used symbolically to illustrate society’s gender stereotyping in early childhood (see Peggy Orenstein’s Cinderella Ate My Daughter) but I think as women’s lives continue to be affected by the subversive forms oppression that still exist in society (i.e., the wage gap, overrepresentation in service industry and health care jobs, etc.) there may be a way of turning the stereotype on its head.

After all, aren’t the Disney princesses oppressed as well? Sure, the majority of them are privileged (and white) but many of them are ruled by patriarchy, or at least require a man to save them from their fates. Those types of fairytales might not always exist in real life, but in the meantime there’s still something to be learned from their stories, even when we’re feeling sad and beaten down by the man.

Looking back on my time working in retail, I realize how often I came back to these lessons when dealing with a difficult situation, like an unhappy customer or a temperamental colleague. Losing your cool and lashing out is an easy choice because it feels pretty good to let out all of that anger and frustration. The decision to remain calm requires a lot more strength. Brownie points if you can do the whole thing with a smile on your face.

So I’m not apologizing for channeling my inner Disney princess at my job, or anywhere else in my life. Yes, as women we are conditioned to act passively and acquiesce. But I see the ways that the Disney princesses find meaning and joy in their lives despite their oppression as a quiet and sometimes necessary strength, even if it is considered stereotypical of my gender.  It doesn’t matter if you’re confined to a castle, underneath a spell or simply working a bad retail job to make ends meet- if you can make like a Disney princess and find compassion and acceptance in your heart, then you’ve found your greatest strength of all.

PPS: Please share your positive experiences with the Princesses on WordPress/Twitter/whatever and let us know so we can share them too!